Any optical transmission system requires a defined range of optical receiver input power for proper operation. In practice, the received power must be higher than the minimum level and lower than the maximum level. The difference between these power levels is the optical margin.

When a transmission system is designed, consideration is given to expected transmitter power, receiver sensitivity, and link loss. The link loss budget is then planned so that there is some extra power at the receiver to allow for degradation over the life of the system, or alternatively the receiver power level should not be too high. For reliable operation, it is important to verify that this planned margin is achieved, otherwise repair and maintenance will be difficult, expensive or impossible. 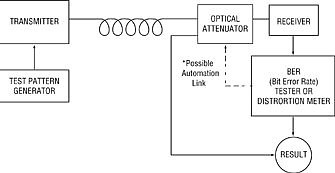 Typical system for determining margin. The transmitter is driven by a data pattern generator, and the BER or Bit Error Rate from the receiver is measured.

A design margin of 6dB is common in telecom systems, although the installed system may achieve a better value, since "worst case" conditions are of course infrequent. The design margin of some high speed LAN systems may be much smaller, since these systems are typically limited by chromatic dispersion rather than loss.

In some situations (notably analogue systems), it may be a design requirement to insert a permanent attenuating pad to optimise the power level coming into the receiver.

Margin verification can save money during construction: If the overall margin is achieved as required, then expensive re-work of sections that are outside planned specifications can be avoided.

Margin verification is one of the final tests on an installed transmission system.

To measure optical margin, the essential apparatus is:

The BER test fiber optic approach is similar in most cases:

It is important that achieved margin is not confused with measurement uncertainty. Therefore, the margin verification should be performed in as accurate a manner as possible. For example, if the measured margin is 5 dB, but the overall measurement uncertainty is 2 dB, then in fact the margin may be only 3 dB, which might be unacceptable. It could also be 7 dB, which might be acceptable.

The Kingfisher VOA provides various benefits to improve the productivity and effectiveness of such measurements: