Fig 2.1: Cross-section of typical single mode and multimode fibers. In both case, the glass diameter is 125u, and the diameter including a protective acrylate plastic coating is 250u.

Typical single mode loss is 0.35 dB / Km at 1310 nm, which with a typical link loss of 20 dB, gives a maximum link length of 57 Km. The ability to achieve such long transmission distances between repeaters or amplifiers is a major factor in it’s success. 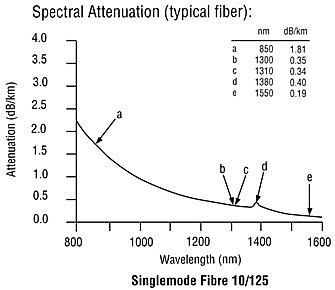 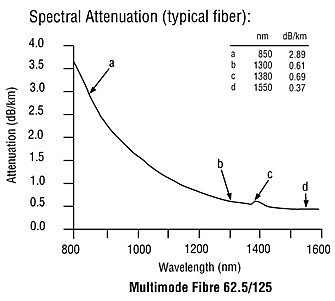 Fig 2.2: Typical attenuation graphs for multimode and single mode loss. Note that the loss is sensitive to wavelengths

The above graphs show typical loss when the glass is mechanically unstressed. Additional loss will be created under stress, and this is termed "microbend loss". Microbend loss is typically caused by: kinking, tension, heat or cold, crushing, winding onto a drum, excessively sharp bending, defective manufacture, poor cable design, or defective cable manufacture. Microbend loss for any given fiber stree, usually increases with increasing wavelngth, particualrly above 1550 nm. The above graph also fails to show rapidly increasing attenuation above about 1625 nm.

Fig 2.4: A comparison of the spectral and spatial distribution of Lasers and LEDs.

In medium to long distance applications, it is assumed that fiber spectral attenuation will dominate any losses.

In short distance & PON networks, loss caused by devices such as connectors and optical splitters may dominate or require specific handling depending on the situation. For example a 32-split PON network will have a splitter with a >15 dB loss, and in a short distance network with MPO connectors, the loss may be almost entirely due to connector losses.

Note in particular that connector losses are quite uncertain: the same pair of connectors will show a randomly varying loss when mated on different occasions. The connector specification will show the average value, which by definition will often not be achieved. Connector loss is better understood by using a statistical mean and standard deviation approach.

Other components in the transmission path will introduce more loss, for example:

Out of band loss testing

It is common practice to measure "out of band" loss, eg at some extra wavelength in addition to expected operating wavelengths. Typical situations include:

The loss budget refers to the calculated allowable loss before a link stops working, usually according to equipment performance specifications.

This is usually determined as a function of transmitter power, receiver sensitivity, and a required reserve margin. The expected losses of individual segments of the link are then estimated, along with a nominal margin to allow for degradation and maintenance. On long or high speed links, estimating these effects for optimum overall lifetime performance, requires considerable skill and experience. On short or low speed links, the link loss may be defined in appropriate standards.

Unlike the more theoretical loss budget, the optical margin usually refers to the change in actual (tested) loss that an operating link can suffer before it stops working. Note this could be either an increase or decrease in loss.

To accurately measure the end to end loss of a system, it is usual to test at the target wavelength using an OLTS, or source and meter.

End to end loss on multiple joined fiber lengths cannot be reliably measured from one end with optical time domain reflectometry, since an OTDR works by mathematical deduction based on a number of assumptions. To accurately measure a splice or connector point loss with an OTDR, a measurement must be made from each end direction, and then averaged. This is not always simple to do. An OTDR excels at identifying the location of an event, and measuring length.

The accuracy of typical loss measurement methods with a source and meter are usually dominated by these factors:

The requirement of better accuracy has made the bi-directional two-wavelength method the preferred and practical solution. With a pair of modern two-way LTS, the complete analysis can be completed in a few seconds. This measurement method requires either two LTS, or two sources and two meters.

To summarize, measurements using two-way averaging have the following benefits:

Most test sources have a significant practical wavelength tolerance. For example, many "1310 nm laser sources" may have a wavelength tolerance of ± 30 nm. Add ± 5 nm for temperature variations, resulting in an actual wavelength of 1310 ± 35 nm. If an LED is used, the FWHM spectral width is probably ± 50 nm, resulting in the possibility of light being transmitted anywhere in the band of 1300 ± 85 nm, eg from 1215 - 1385 nm. Fiber loss characteristics may vary quite significantly over these extremes.

As a result of source wavelength uncertainty, there may be some variation between the conditions under which a system is tested, and actual in-service conditions. To put this into perspective, @ 1310 nm on a link of say 50 Km, the link attenuation uncertainty caused by a tolerance of ± 30 nm would be about ± 0.95 dB.

In some older systems, or in a research environment, possible effects due to cladding mode transmission may need to be assessed, however with modern cladding mode stripping fiber, these effects can usually be ignored.