Measurement sources used for measuring fiber optic attenuation vary enormously in cost and performance. This application note explains what it is all about.

The peak emitted wavelength of any source is usually called the center wavelength. In Fabry-Perot laser sources used for attenuation testing, the initial tolerance is typically ± 30 nm, which affects both attenuation effects, and measurement accuracy. In addition to this tolerance, temperature sensitivity of around 0.4 nm / °C creates further variation. The temperature effect can be virtually eliminated by use of temperature controlled emitters.

To put all this in perspective: The effect of 0 - 40 °C temperature induced wavelength change will alter the attenuation dB measurement of a 50 Km single mode link by typically ± 0.25 dB. However the link attenuation uncertainty caused by an initial tolerance of ± 30 nm would be about ± 0.95 dB. Note that the wavelength uncertainty of operational systems may be of a similar amount, in which case there may be some mis-match between the measured attenuation, and the attenuation seem by the operational system.

It is possible to select devices with better initial tolerances (eg for measurement purposes), however this has little practical benefit if the wavelength of installed systems also has a large uncertainty. As a practical compromise, a laser center wavelength tolerance of ± 20 nm is often specified for sources.

Course WDM lasers usually have a wavelength tolerance of about 3 nm, and DWDM lasers have a much tighter tolerance still. However these DFB type lasers are not so ideal for measurement purposes, since coherent interference noise in cables tends to produce more measurement uncertainty. When DFB lasers are used, it is preferable to ensure a low reflection environment.

Sources emit light over a range of wavelengths. The spectral width may be specified in terms of FWHM, or Full Width Half Maximum. This is OK for transmission systems, but in measurement situations, there may be enough power outside this specification to affect attenuation measurements.

For example, an LED emits over a broad spectrum of 30 - 200 nm, depending on the type. This broad spectral width tends to overwhelm the issue of initial center wavelength tolerance. 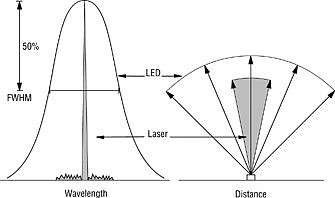 Fig 8.1: A comparison of the spectral and spatial distribution of Lasers and LEDs.

If spectral width, initial tolerance and temperature effects are included, a 1300 nm LED could be emitting some light anywhere over 1150 - 1450 nm. The 850 nm LED spectral width is generally around 50 nm FWHM.

Lasers have a much narrower spectrum of up to 5 nm FWHM, depending on the type. Therefore for loss testing purposes, the laser center wavelength tolerance is more important, and the spectral width can generally be ignored.

The output power stability of sources is a significant issue:

Source nominal power levels vary quite widely. The actual power level is not often very important, since a reference is taken before starting work. It is the stability that is critical. When determining approximately how much power is required, the following factors should be taken into account:

In order to achieve repeatable and worst-case attenuation results across the industry, multimode sources should now comply with USA and European standards which define the source center wavelength tolerance, spectral width and Coupled Power Ratio. The standards require loss measurements to be performed using the bi-directional method at two wavelengths, using a standards compliant LED source.

Battery systems: Battery life is obviously a major convenience issue. Some Kingfisher sources have a battery life of up to 190 hours. Also important will be an auto-turn off feature, and low battery indicator. Where possible, alkaline batteries are now preferable to re-chargeable types, due to greater convenience, higher capacity, and longer charged shelf life. Should re-chargeable batteries be required, NiMH cells are preferable to NiCd cells, since they give longer run times and avoid the problem of disposing of toxic cadmium waste.

Ease of use: how long will it take to train operators? Kingfisher sources with similar general features and controls are available over the full spectrum of price and performance. One method of operating all sources, could save a large organization plenty on training costs.

The two main regulations governing the safety of sources are the international standard IEC 60825 2011, and the USA regulation 21CFR1040.10. As applied to fibre optics, both standards generally draw a distinction between safety levels above or below 1 mW or 0 dBm. Power levels above this may attract onerous complications in relation to work practices, interlocks and safety issues, and are therefore to be avoided where possible.

Our equipment is used in all phases of fiber optic manufacture, installation and maintenance. Our comprehensive documentation and resources help you get started easily.

Kingfisher Products are Australian made, with a global distribution & support network spanning over 70 countries.

Browse our products
You may print, photocopy and redistribute this document for educational use only, provided that this page is printed as is, without modification. This content may not be used commercially.