Which loss measurement wavelengths do I need?

It has been standard practice for many years to perform single mode fiber tests at 1550 nm (in addition to 1310 nm), to help find identify cabling stress points. Typically, a kinked cable may pass at 1310 nm, but fail at 1550 nm or beyond.

Attenuation in CWDM systems is usually measured at only a few wavelengths, and varies quite substantially depending on the application and fiber type. The water absorption peak at 1383 nm may require evaluating, and a selected "1383 nm" laser is needed for this task. Most current systems avoid the water peak wavelength area due to this potential loss problem. Loss checking of passive CWDM channel filters requires specific CWDM compliant light sources.

"Out of band" single mode

Has been traditionally specified as "1625" nm. This has traditionally used Fabry-Perot lasers with poor spectral accuracy. New DFB lasers have much better properties for this application, since their actual operating wavelength is more tightly controlled (see table below). For true WDM compliance, the out of band wavelength must be <1620 mn.
There is also an emerging class of "1650" nm OTDRs, however their usually poor wavelength accuracy and high cost makes them less useful.

This illustrative graph shows how typical single mode fiber attenuation varies with wavelength. It may not be exactly accurate
Modern fibers may have a negligible water absorption peak at 1.38 µ
Wavelength uncertainly of tests above 1600 nm can have a major impact on loss measurement 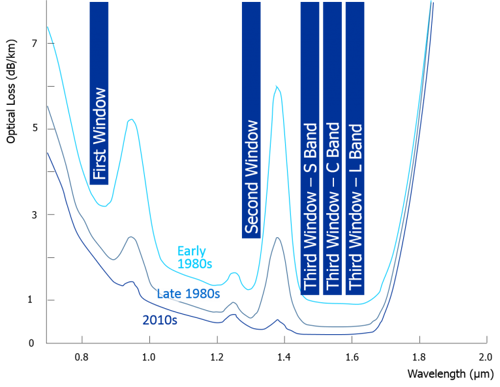